Awww ... sex in the corn field. It's happening all around us. For the next few weeks, pollination and fertilization of corn ovules will be occurring throughout Wisconsin. The success of pollination will determine management decisions as the growing season progresses.

Pollen shed begins near VT and is essential for grain development. During this 1 to 2 week pollination period, each silk must emerge from the ear husk, and a pollen grain must land on the ovule and fertilize it for a g kernel to develop.

When a pollen grain lands on a silk, a pollen tube is initiated. The pollen tube grows within the silk to the ovule where fertilization occurs and the kernel embryo is formed. A second fertilization also takes place that results in the formation of the endosperm. Immediately following fertilization, an abscission layer forms at the base of the silk, restricting entry of genetic material from other pollen grains.

Pollen sheds from the male flowers on the tassel for 5-8 days and is dependent upon temperature, moisture and time of day (peaks around mid- to late-morning or early evenings. Pollen grain is viable for 12-18 hours (less in higher temperatures) after it drops from the tassel; most pollen falls within 20-50 feet of the plant.

"Nick" is the period when pollen shed (VT) coincides with silk receptivity (R1). Poor nick can result from hot and dry weather. Silks can be delayed and dehydrate, which hastens pollen shed and causes the plant to miss the window for pollination.

Silks will grow for 3-5 days or until pollination occurs. Silks will turn brown once outside the husk. Stresses that reduce pollination can result in an ear with a barren tip called a "nubbin." Each kernel has a noticeable point where the silk was attached; the kernel is surrounded by paleas, lemmas, and glumes.

After an ovule is fertilized, cell division occurs within the kernel for ~7-10 days. After cell division is complete, the cells fill. The outer part of the kernel is white, and the inner part is clear with very little fluid. The embryo is not yet visible. The kernel endosperm fills with photsynthate, most of which is produced by the leaf on the same node as the ear shank; this ear leaf provides up to 60% of the total grain yield.

There are two techniques commonly used to assess the success or failure of pollination. One involves simply waiting until the developing ovules (kernels) appear as watery blisters (the "blister" stage of kernel development). This usually occurs about 10 days after fertilization of the ovules.

Another more rapid means can be used to determine pollination success. As described above, each potential kernel on the ear has a silk attached to it. Once a pollen grain "lands" on an individual silk, it quickly germinates and produces a pollen tube that grows the length of the silk to fertilize the ovule in 12 to 28 hours. Within 1 to 3 days after a silk is pollinated and fertilization of the ovule is successful, the silk will detach from the developing kernel. Unfertilized ovules will still have attached silks. Silks turn brown and dry up after the fertilization process occurs. By carefully unwrapping the husk leaves from an ear and then gently shaking the ear, the silks from the fertilized ovules will readily drop off. Keep in mind that silks can remain receptive to pollen up to 10 days after emergence. The proportion of silks dropping off the ear indicates the proportion of fertilized ovules (future kernels) on an ear. Sampling several ears at random throughout a field will provide an indication of the progress of pollination.

Halfway there! Yield and quality changes of corn silage during challenging first-half environments. 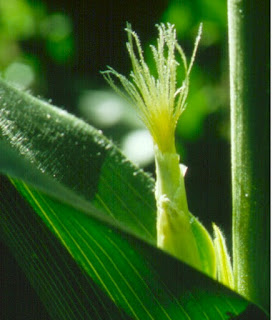 The middle of July marks the halfway point of the corn life cycle. Pollination is upon us and the ultimate yield and quality potential of the 2022 corn crop will be determined. A lot can happen yet but we are entering the pollination period in good shape across most of Wisconsin.

Corn forage yield is shown in Figure 1. Overall, corn silage has yielded 10.8 Tons of Dry Matter (DM) per Acre over the study period. Temperature differences during the first half of the growing season did not affect yield. Precipitation (too much or too little) during this period decreased yield, with yield more affected by wet weather. Environments with extreme temperature and precipitation (either too warm and dry, or too cool and wet) decreased silage yields.

The overall forage moisture of all plots averaged 66% (data not shown) with warmer drier weather between April 1 and July 14 resulting in lower forage moisture. The effect of weather during April 1 to July 14 on NDFD is shown in Figure 2. The overall average was 60%. Cooler and warmer temperature environments increased NDFD over the average. Dry weather increased NDFD while wet weather decreased NDFD compared to the average, especially in extreme years.

Overall, starch content averaged 29% (Figure 3). Warm dry seasons resulted in greater starch content than cool wet seasons. For all of the years that were classified as warm and dry during April 1 to July 14, significant precipitation fell during the pollination phase of development relieving plant stress. We do not have sigificant silage yield and quuality data for environments like 1988 and 1989 that were significantly drier for longer periods than April 1 to July 14.

The end result is that warm and dry years tend to have significantly more milk per ton that an average year or cool, wet years. Precipitation either too much or too little during April 1 to July 14 decreases milk per acre more than an average year. Temperature during this period had little effect on milk per acre.

The growing season for 2022 is average so far (click here). A lot can happen yet, so conclusions and predictions using this data are challenging. I present the data to provide a benchmark using previous seasons. Again, the most important management decision from this point forward will be to determine the success of pollination.

The magic of corn seed germination and emergence

I think nearly every corn planter in Wisconsin was planting this past week. There are some wet areas in northeastern Wisconsin that have prevented planting, but a significant jump in planted acreage should be measured by USDA-NASS in next Monday's progress report.

Now the magic begins when dry seed imbibes water and bare or brown fields turn greener every day across the landscape. The germination process and the success of the seed in emerging and establishing is key and the first yield component determined for the growing season.

Protected within the seed coat is an embryonic plant that remains dormant until germination is initiated by the physical process of imbibing water. The white starchy endosperm is the main energy source until the young seedling is established. After planting, water and oxygen are imbibed into the seed for 24-48 hours activating growth hormones and enzymes. Starch is broken down supplying the embryo with energy for metabolism and cell division.

Within the embryo is a miniature corn plant that already has a primary shoot, leaves and root system protected by rigid sheaths called the coleoptile (above-ground) and coleorhiza (below-ground). The first structure to emerge from the seed is the radicle root, followed by the coleoptile and seminal roots.

The coleoptile is pushed to the soil surface by the mesocotyl. When sunlight falls on the coleoptile tip, enzymes are activated that soften the tip allowing the first true leaf of the plant to break through. The growing point of corn is 3/4 of an inch below the soil surface and will remain below-ground until the plant has 5 to 6 leaves.

The germination process from dry seed to seedling emergence requires about 125 Growing Degree Units (GDUs). Normally in the beginning of May, we accumulate about 10 GDUs per day, so emergence takes about 12 to 13 days. The 2022 growing season is starting out fast with record high temperatures, and I have seen some recently planted fields already emerged. Emergence GDUs may need to be adjusted:

There might be many reasons why a seedling does not emerge in a stand of corn. The germination process is really a race between pest pressure (diseases and insects) and the ability of the seedling to outgrow the pest. Seed treatments protect the seedling from disease and insects for the first 30 to 45 days of the growing season. Planting into cloddy/crusted or cold soils can result in seedling leaves unfurling below-ground, reducing plant stand and yield potential. Imbibitional chilling can result in plant death.

This is one of my favorite times of the year in Wisconsin. I wonder what the growing season has in store for these developing plants. As you drive around the state, enjoy the landscape and all the different greens that develop over the month of May.

Please forward this article to those who may find the information useful.
Click to subscribe or unsubscribe from these emails.