Guidance When Using Corn as a Cover Crop 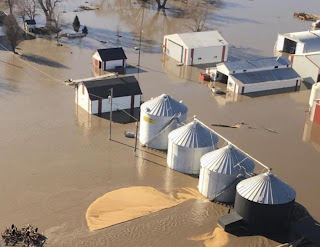 This year, traditional cover crop seed is hard to find. However, corn and soybean can be considered a cover crop (click here and here). Corn is deep-rooted and by the end of the growing season can produce significant residue even when planted in July. The first thing you must do, however, is talk to your crop insurance agent and make no decisions without their input.

"Farmers taking the full prevented plant indemnity should note that they cannot ever harvest the cover crop for grain or seed. RMA rules allow, only after September 1, grazing and harvest as hay (for bedding or feed) and now for silage, haylage or baleage. If a farmer wants to harvest it as grain or seed, then they should declare it as an alternative crop and only collected the partial (35%) prevented plant indemnity."  --- Paul Mitchell, UW Ag Economist

The end of the late planting period is set by USDA-RMA (Risk Management Agency) and is posted for most of Wisconsin as June 25 for corn grain and June 30 for corn silage. A farmer is not allowed to take the full prevented plant indemnity, using the same crop as a cover crop before these dates. If planted before these dates, the farmer should report it as late planted with a reduced guarantee.

The following agronomic guidance is given when growing corn as a cover crop. The goal of a cover crop is to protect the soil from erosion (wind and water), to improve water quality by capturing nutrients, to build organic matter, and to suppress weeds. Ultimately the decision to use corn as a cover crop is the cost of production. Typically, it would cost $400 to $450 per acre to establish corn.

Practices that maintain ground cover or establish a crop canopy quickly include:
Performing any ONE of the following practices, if different from the current on-farm commercial production practice, indicates that the objective of growing corn for grain has changed to the objective of growing corn as a cover crop.
July plantings rarely result in grain production in Wisconsin. A killing frost usually occurs during September or early October. If grain is produced and kernels develop beyond the milk to dough (R3-R4) stage then the crop should be cut with a haybine.

Mitchell, P. 2019.  Can I Use Corn or Soybeans as a Cover Crop on Prevented Plant Acres?