Every day that passes without a killing frost means more and more cornfields in Wisconsin will mature normally. The extended fall during 2017 should improve grain yield and more importantly reduce grain moisture. We have just begun to harvest the UW Corn Performance Trials and so far, grain yields at Galesville and Chippewa Falls averaged 239 and 226 bu/A. Grain moisture at Galesville averaged 25.6% and 30.7% for the early- and late-maturity trials. At Chippewa Falls, grain moisture averaged 22.7% and 26.4%. Many hybrids yielded above 250 bu/A.

Grain yields of the top-producers in Wisconsin are nearly double the state average. The highest recorded grain yields in the National Corn Growers Association Yield Contest range from 278 bu/A for the No Till/Strip Till Irrigated category to 327 bu /A for the Irrigated category (Table 1). The top-producers in Wisconsin have been adding 3.0 to 4.2 bu/A per year (Figure 1). 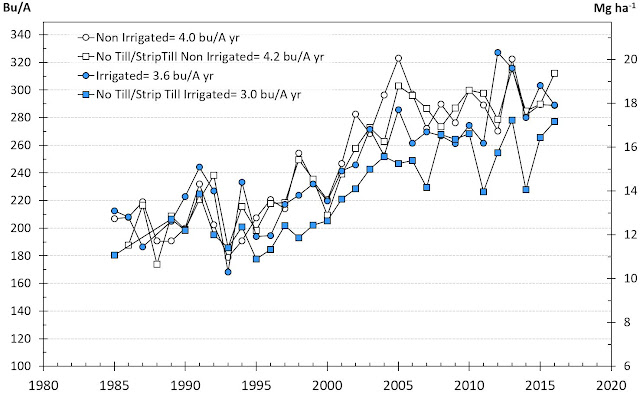