Tillage used to be about controlling weeds and preparing a seedbed. Today it is all about stand establishment. We have many excellent herbicides and advanced technology on our planters. So tillage is often not  necessary in today’s corn production systems, except in continuous corn. Tillage responses are more often measured in the northern corn belt and can increase yield 5 to 7%.

How does crop rotation and tillage interact to affect grain yield?

A corn-soybean rotation X tillage study was begun in 1983 at Arlington, WI. The rotation treatments consist of continuous corn, continuous soybean, alternating corn and soybean, and five years of corn followed by five years of soybean. Every phase of these 14 rotation treatments is grown every year. Two tillage treatments designated no-till (NT) and conventional-till (CT) have been practiced. since 1987. No-till consists of one-pass with a 13-wave coulter, followed by trash whippers and then double disc seed openers. Conventional-till is fall chisel plow followed by two spring field-cultivator operations. The continuous corn and soybean plots have been in place 30 years. The results for the previous 20 years (1993-2012) are shown in Figure 1 for corn and Figure 2 for soybean.

Little corn yield differences are observed in rotated corn (CS) and first-year (1C) corn following 5-years of soybean (Figure 1). During the second-year of corn plots that had conventional tillage increased yield 5% over no-till plots (2C). Yield was 10 to 11% greater for conventional-till plots than for no-till plots as the number of continuous corn production years increased (3C, 4C, and 5C). So, tillage is not needed when corn is annually rotated with soybean. Tillage can make up some of the rotation effect over time in continuous corn, but it does not bring yield back to rotated corn yield levels.

The story is somewhat different for soybean. Grain yield is 3 to 5% greater in no-till than conventional till for the rotated soybean (SC), first- (1S) and second-year (2S) soybean following five years of corn (Figure 2). There is no tillage effect as the number of years of continuous soybean production increases (3S, 4S and 5S) Conventional-till does increase yield over no-till in soybean plots that have been in continuous production for 30 years (SS). So, tillage is not needed when soybean is annually rotated with corn. 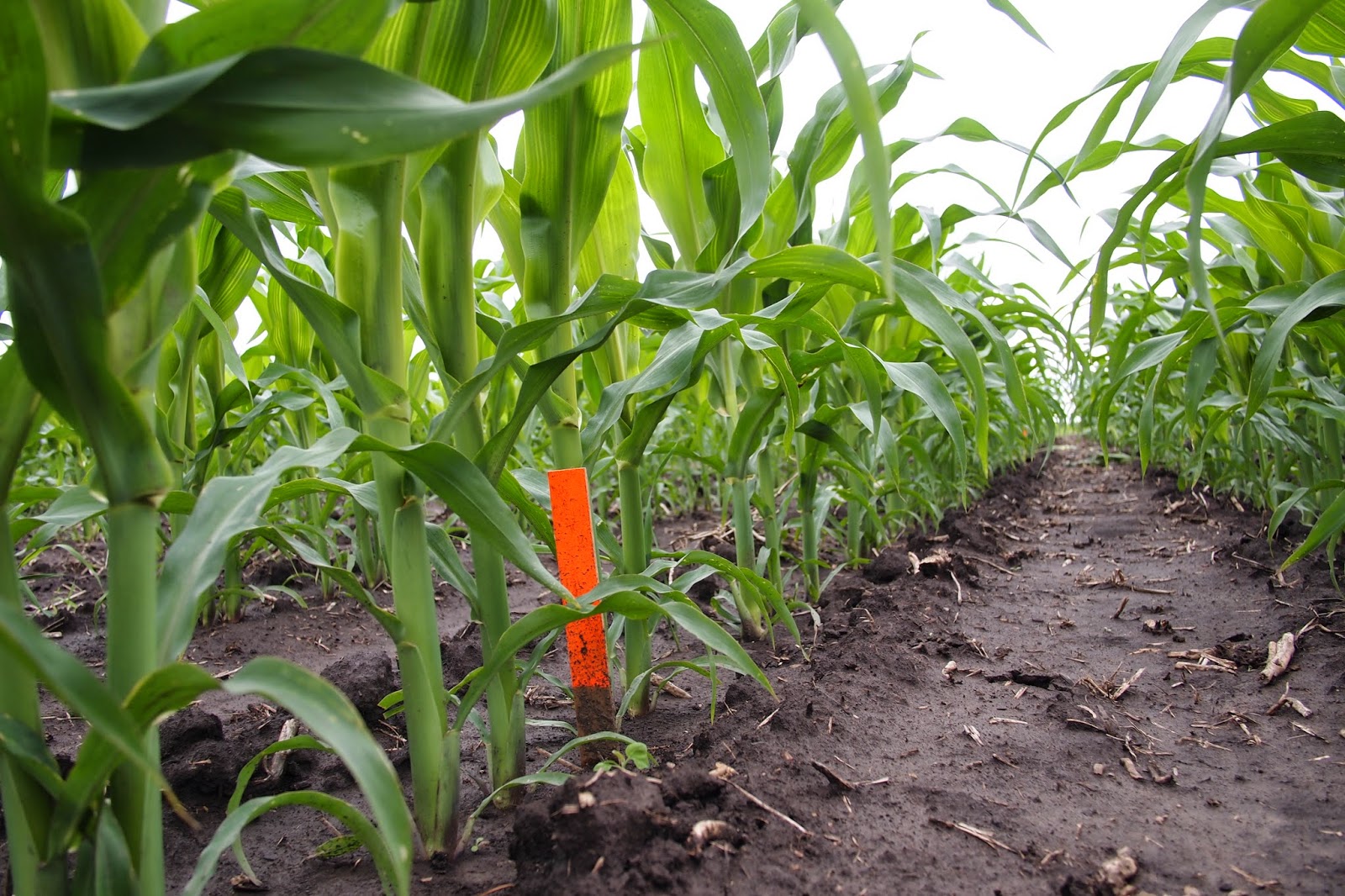 I was curious about corn seed survival in Wisconsin. We have traditionally figured that 90% of the seed planted survives to produce a harvestable plant. So to establish a field at 30,000 plants/A, you would need to drop seed at 33,333 plants/A.

Corn seed treatments are required in most planting situations. These treatments protect the plant through the first four- to six-weeks of the corn life cycle. In the past the dominant seed treatment was Captan. Since 2005, we have been tracking the use of seed treatments in the UW corn hybrid performance trials and to date we have had 164 different combinations of seed treatments entered. The question that many growers have asked is, "Has corn seed survival improved in modern production systems?"

Since 2008, the UW hybrid evaluation program has used a precision planter to establish plots. The seeding rate for every plot planted in this program is 34,100 plants/A. At harvest we count the number of plants that survived in 10% of the plots. Various seed treatment combinations are used on hybrids, however, no chemical seed treatments are used in the organic trials.

Table 1. Corn seed survival in the UW Corn Hybrid Performance
Trials. Since 2008, all plots have been seeded at 34,100 plants/A.
Data derived from reports available at http://corn.agronomy.wisc.edu/HT/ (Table 5 or 6).

Another study where we routinely measure seed survival is a planting date experiment at Arlington (Table 2).  In this study a known quantity of seed is planted and then emerged plants are counted at V5-V6. The optimum time to seed corn at this farm is May 1. Yet, seeding around May 1 does not always result in the best corn seed survival. For example, during 2010 seed survival was 85% in early May with dates before and after where survival was 95% or greater. In most years planting during April decreased seed survival. So to achieve a target harvested population, seeding rate adjustments would need to be made and changed as the planting season progressed.

Corn seed survival likely varies by field. The more challenging fields in our program are in northern Wisconsin. One exception is Lancaster where aggressive tillage is used to prepare the seedbed with soil crusting resulting in some years. Average corn seed survival seems higher than the 90% level we have traditionally used. We should probably be using 92 to 95% seed survival. However, there are numerous exceptions due to seed quality, planting date, tillage system, seed treatment and hybrid.
No comments:
Email ThisBlogThis!Share to TwitterShare to FacebookShare to Pinterest
Newer Posts Older Posts Home
Subscribe to: Posts (Atom)