How Late Can I Plant Corn? 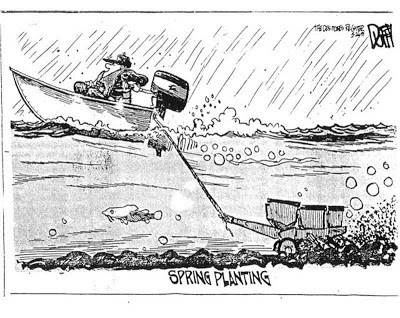 The last USDA-NASS report indicated that 74% of the Wisconsin corn acres have been planted, so we still have over 1 million acres to plant. As weather delays continue, I am getting more questions about, "How late can corn be planted?" The short answer is August 1. However, your production objectives need to change. Most producers will not likely get into the field until next week, so the only locations that can realistically produce grain yet are the southern tier of Wisconsin counties.

Options are rapidly running out. In order to determine what options are still available, you need to know how many Growing Degree Units (GDUs: base=50, max= 86)) can still accumulate during the growing season. By back calculating the number of GDUs remaining after a planting date until the average frost date (<32 F), a farmer can determine the best relative maturity for the remaining growing season.The total GDU accumulation between January 1 until the average fall frost date is 2700 GDUs at Arlington and 2500 at Marshfield (Figure 1). Another 200-300 GDUs are required to dry the crop while standing in the field after it matures. So far, we have accumulated 350 to 400 GDUs at these sites.

Figure 1. Average Growing Degree Unit (GDU) accumulation at Marshfield and Arlington, WI. Weather data obtained from Bill Bland (AWON and UW-Soils) and the Midwest Region Climatological Center. The curves represent 30-yr averages (1983-2012) and begin on January 1, May 1, May 20, June 1, June 10, June 20 and July 1. The average frost date during this 30-yr period was October 3 at Marshfield and October 6 at Arlington. 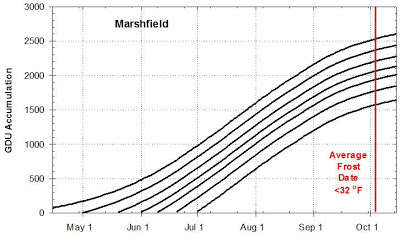 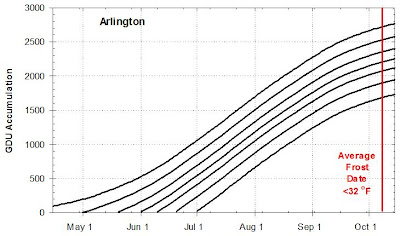 All hybrids require a similar amount of GDUs to complete grain-filling (~1000 to 1200 GDUs). The main difference between hybrids with different maturity ratings is the time required to achieve silking (Table 1). Long-season hybrids (110-115 d RM) in Wisconsin require about 1500-1700 GDUs, while shorter season hybrids (80-85 d RM) require about 800-900 GDUs. Plants respond to these GDU requirement differences by producing fewer leaves which can be further influenced by photoperiod (latitude). 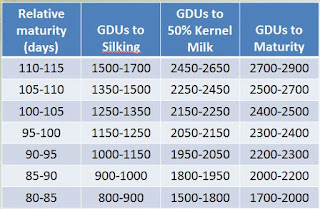 Table 2 presents suggested hybrid maturities for planting dates during the month of June and the remaining GDUs that can be accumulated by the average frost date. For example, on a June 10 planting date at Arlington there are 2060 GDUs remaining for the growing season (Figure 1). An 80-90 d RM hybrid requires about 1700-2200 GDUs to mature while a 95-100 d RM hybrid would be at 50% Kernel milk after the same number of GDUs (Table 1). Thus, proper maturity selection depends upon the production objective in June.

Table 2 also describes the last planting dates that can be done for corn to produce grain or silage. The last dates to produce corn grain are June 1 in the north and June 10 in the south. For silage it is June 20 in the north and July 1 in the south. These dates are similar to the last planting dates for soybean (see http://soybean.uwex.edu/documents/MGSwitch.pdf)

With corn silage we have two forage quality peaks: one at silking, the other near maturity (see Figure 1 at http://wisccorn.blogspot.com/2012/07/harvesting-barren-and-poorly-pollinated.html). In a normal silage situation we want to select a maturity that gets us to the second peak. In a biomass production situation, we want to hit the first peak. To do that at Marshfield on July 1 when we only have 1570 GDUs remaining in the growing season (Table 2), we would chose a hybrid that is 110-115 d RM so that it silks when a frost occurs.

So for silage production situation, long-season hybrids are the ones to choose so that silking occurs when a killing frost occurs. Frost kills the plant and drying will need to occur before it can be properly ensiled. The risk in this situation is that many acres could be ready at the same time and be difficult to harvest in a timely fashion.

We have a third option after these last dates for grain and silage. Corn is one of the best options for emergency forage situations where biomass production is the only option left (see http://corn.agronomy.wisc.edu/Management/pdfs/EmergencyForages/2008EmergencyForageCrops.pdf). After August 1, biomass production from corn and other crops like oat are similar. However, corn may still need to be chosen due to herbicide restrictions.

Overriding all of these decisions and options is crop insurance. If insured acres not planted by the final planting dates (May 31 for corn for grain), they are considered "late" and a grower has three options:
Further Reading
http://www.aae.wisc.edu/pdmitchell/CropInsurance/PP_Options.pdf
http://www.aae.wisc.edu/pdmitchell/CropInsurance/LatePreventPlant2013.pdf

The energy in corn silage comes from two energy pools: NDFD and Starch. The NDFD energy pool is derived from stover which consists of the stalk, leaves, tassel, cob, ear shank and husk on the corn plant. The starch energy pool consists of the grain endosperm. These energy pools can be manipulated by hybrid selection and management. The management issue of the 2013 growing season has been planting date. Some farmers are wondering if planting a bmr hybrid late would help with the stover energy pool.

From 2009 to 2012 in our planting date studies we compared silage yield and quality of full-season grain and brown midrib hybrids at five planting dates in each year. 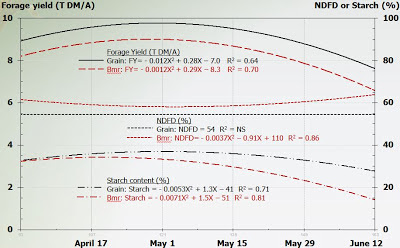 During these years Milk per Ton was not affected by planting date for full-season hybrids (Figure 2 in http://wisccorn.blogspot.com/2013/05/B037.html), Milk per Ton decreased with later planting date. For brown midrib hybrids, Milk per Ton was best when planted early, but decreased as planting was delayed. The full-season grain hybrid always produced more Milk per Acre than the full-season brown midrib hybrid even though the energy in the NDFD pool was always greater. The difference is made up by the energy in the starch pool of a grain hybrid. 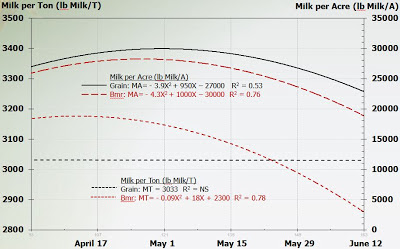 The details of these studies can be found at http://corn.agronomy.wisc.edu/Research/Default.aspx.
No comments:
Email ThisBlogThis!Share to TwitterShare to FacebookShare to Pinterest
Newer Posts Older Posts Home
Subscribe to: Posts (Atom)