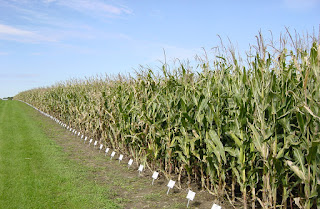 One of the most important decisions a farmer makes is the selection of high performing, adapted hybrids and varieties. Selecting the correct hybrid/variety can often mean the difference between profit and loss. Increasingly, during the current bio-engineered era, the choice of hybrid or variety that a farmer selects dictates the management style for that field.

Plant breeders and agronomists test thousands of commercial and new experimental hybrids and varieties for several years at many locations over a range of plant populations, other management practices and environments. These crop performance trials determine which hybrids/varieties  have yielding ability superior to current commercial hybrids/varieties and estimate disease resistance and other important characteristics.

For a copy of the 2019 crop performance trials see the following links:

These results are a good place to start when evaluating hybrids and varieties to grow during 2020. Certainly, an on-farm test in conjunction with seed company trials, and University trials would probably give the best information, if all hybrids/varieties of interest were in the trials. Since most farmers do not have the resources to conduct on-farm trials at several locations, using unbiased results from other trials to supplement on-farm yield results can increase the chance of picking a hybrid that will do well next year.
No comments:
Email ThisBlogThis!Share to TwitterShare to FacebookShare to Pinterest

Record high prevent plant acreage occurred in 2019. In July, many acres were planted to cover crops, including corn (Figure 1). Due to low forage inventories, USDA-RMA allowed cover crop acres to be harvested for silage.


Corn has two peaks in forage quality: one at pollination and one at 50% kernel milkline. Forage quality as measured by Milk per Ton is high during vegetative phases prior to flowering. Like all forages, quality decreases after flowering. Unlike other forages, quality improves beginning around R3. The early peak in forage quality at pollination is high in quality but too wet for ensiling. The later peak is more familiar and is the one we typically manage for when producing corn silage because it maximizes both biomass yield and quality.

If pollination is unsuccessful, the forage quality following the first peak does not change and will continue to remain high due to higher sugar content (water soluble carbohydrates), higher crude protein, higher crude fiber and more digestible fiber than normal corn silage. Unsuccessful pollination (bareness) generally reduces yield and grain content resulting in increased fiber content, but this is often accompanied by lower lignin production that increases fiber digestibility.
If pollination is poor yet some kernels are developing, the plant can gain dry matter and farmers should wait with harvest.

Harvesting and Handling Barren Corn
The harvesting challenge is that green, barren stalks will contain 75-90% water. Barren corn is difficult to harvest because it is rank and too wet for silage storage structures. Arlington UW-ARS staff have had some success using a discbine to cut barren corn into a windrow. The windrow would need to dry to desiccate the forage. A forage chopper with a hay pickup attachment is then used to gather and chop the windrow into a wagon for transport to a storage structure for ensiling.

Grazing is an option but be careful about nitrate toxicity problems. If grazing, consider potential for nitrate toxicity. This is especially likely to be a problem if growth was reduced to less than 50% of normal and/or high levels of nitrogen were applied.

If the decision is made to harvest the crop for ensiling, the main consideration will be proper moisture for storage and fermentation. The crop will look drier than it really is, so moisture testing will be critical. Be sure to test whole-plant moisture of chopped corn to assure yourself that acceptable fermentation will occur.

Forage quality of barren and poorly pollinated corn
Coors et al. (1997) evaluated the forage quality of corn with 0, 50 and 100% pollination of the kernels on an ear during 1992 and 1993. These plots were harvested in September.

A typical response of corn to stress is to reduce grain yield. Bareness reduced whole-plant yield by 19% (Table 1). Kernels on ears of 50% ear fill treatments were larger and tended to more than make up for reduced numbers (Albrecht, personal communication). With the exception of protein, as ear fill increased, whole-plant forage quality increased.

Yield and Quality of July Planted Corn
We conducted experiments during 2005 and 2006 to determine what could be expected by planting corn in July. Three corn hybrids (brown midrib, full-, and shorter-season) were planted on five different dates from April 28 to August 1 at Arlington, WI. The 2005 growing season had a killing frost on October 26, which was three weeks later than normal.

Seasonal dry matter production after planting during July ranged from 0.7 to 7.5 Tons DM/A while the same hybrids planted April 28 to June 1 produced 8.7 to 10.0T DM/A (Table 2). Milk per acre is significantly lowered 92 to 17% to levels ranging from 2,300 to 24,000 lbs milk/ A for planting dates in July. Crude protein, NDF and NDFD increased with later planting dates. Although, little starch content was measured in later planting dates, overall milk per Ton tended to decrease slightly. Thus, relatively small changes in Milk per ton occurred during planting dates in July with levels ranging from 2800 to 3200 lbs milk/T, which was a 5 to 8% decrease from corn planted April 28 to June 1. 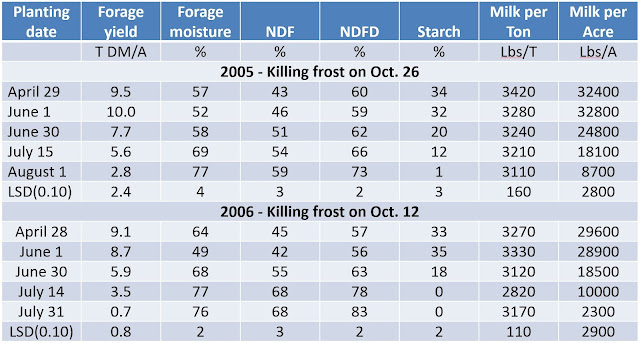 Corn can produce significant dry matter yield when planted during July, but the amount produced depends upon when a killing frost occurs. Growers need to check on options available from their insurance companies before taking action and planting corn in late June and July for emergency forage. Herbicide labels must be adhered to before switching to other crops.

PDF version
No comments:
Email ThisBlogThis!Share to TwitterShare to FacebookShare to Pinterest

The “Normal” Pattern of Corn Forage and Grain Development

Corn is a high yielding, high energy, low protein forage commonly used for growing and finishing beef cattle, in cow-calf production systems, for growing dairy heifers, and for lactating dairy cows. Corn grown as a forage and fermented in a storage structure preserves the silage for subsequent feed-out. Understanding yield and quality changes during the life cycle of corn is critical for timing harvest of a field.

The “Double Peak” of Corn Silage Quality
Corn exhibits a “double peak” for corn silage quality during its life cycle (Figure 1). The first peak is related to energy derived from stover fiber (NDFD) and water-soluble carbohydrates, while the second peak is derived from NDFD and starch content of grain. Forage quality as measured by Milk per Ton is at the first quality peak just prior to silking (R1). Like all forages, Milk per Ton decreases following flowering (VT-R1). Unlike other forages, corn silage Milk per Ton after the kernel blister stage (R2), steadily increases to a maximum second quality peak around 50% kernel milkline development (R5.5) due to grain yield development.

Forage yield and Milk per Acre
One of the unique aspects of corn as a forage crop is that yield and quality reach maximum values at nearly the same time. Forage yield increases steadily through its life cycle. At R1 all the plant photosynthetic “machinery” is produced on the plant. For most hybrids grown commercially in Wisconsin the grain filling period (R1-R6) is about 55-60 d. Following pollination, grain develops in a sigmoidal fashion with a 7-10 d lag period, followed by a 40-44 d linear phase, and ending with a 7-10 d maturation phase. Starch content increases as grain develops and matures.

Multiplying corn forage yield by Milk per Ton results in Milk per Acre. Milk per acre peaks at R5.5. Then due to leaf senescence and loss, yield and quality tends to decrease slightly.

Using Forage and Grain Moisture for Harvesting
At some point forage yield is no longer as important as timing harvest at the correct moisture for the storage structure to ensure proper fermentation and preservation. The wettest plant part on corn is the lower stalk, which is also of poor quality (low NDFD) and is high in nitrates. The driest plant part is grain. By raising the chopper cutter bar 12 inches, forage moisture decreases 3-4% points. Also, the wettest, poorest quality plant part is left in the field. Forage yield is decreased about 10 to 15%, but forage quality increases 8 to 12%, so that overall Milk per acre is only reduced about 3 to 4%.

The effect on forage moisture is significant when the field is scheduled to be harvested by a custom chopper. By adjusting cutting height, the operator can better achieve the optimum moisture for the storage structure. About a one week shift in harvest timing can be achieved (assuming 0.5% per day drydown rate).