Strip-Tillage: How does it affect yield in Wisconsin?

Farmers in Wisconsin are often challenged by cool, wet soils in the spring. Many farmers will chisel plow and field cultivate (2x) to prepare a seedbed to overcome these typical soil condition challenges. Over the last 40-50 years some farmers have sought ways to be less aggressive with tillage leaving more residue on the soil surface to protect it from erosion. Often though there is a "yield penalty" for growing corn in reduced tillage and no-till, especially for continuous corn. 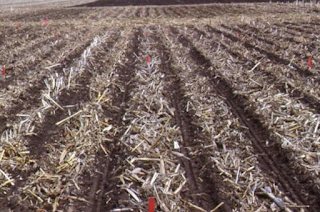 Strip-till is considered a variation of no-till. The Conservation Technology Information Center's definition of no-till includes strip-till, provided less than one-third of the total row area is tilled. In strip-till, an 8-inch band in a 30-inch row spacing is aggressively tilled and fertilized using fluted coulters, knives and berm-forming baskets in either the fall or spring. The objective is to dry out and warm up soil in the seed placement zone before spring planting to encourage more uniform stand emergence and plant density.

In the fall of 2000, we initiated a tillage trial to evaluate the impact of strip-tillage on corn yield. The most aggressive tillage operation in the trial was chisel plow followed by two field cultivator operations, while the least aggressive tillage operation was no-till which used a single 13-wave fluted coulter and trash whippers on the planter. Four strip tillage treatments based on tool aggressiveness were applied. Treatment ST4 was the most aggressive strip tillage treatment (9-inch knife, 3 13-wave coulters and berm forming baskets). The strip-tillage treatments varied through the early years of the trial, however, from 2007 to 2015 the treatments were consistent. For Figure 1, we considered 2007 a "set-up" year and deleted it from the analysis. We analyzed 8 years of data (four 2-year cycles for the corn-soybean rotation)

How long can we continue to plant corn in 2016?

With average growing conditions corn planted after June 1 to June 5 in northern and central Wisconsin and after June 10 to June 15 in southern Wisconsin, will probably not mature with reasonable grain yield and moisture content, even with very early hybrids. However, corn silage from shorter-season hybrids may still have acceptable quality when corn is planted until June 20. Corn planted after June 20 will likely contain little or no grain, and only stover (stems and leaves) will be produced. Table 1 lists alternate hybrid Relative Maturities for delayed planting dates for the standard Relative Maturity belts shown in Figure 1.

It is usually easier to control weeds in late corn plantings than in early plantings. Late tillage kills many germinated weeds and crop seedlings are more competitive due to warmer temperatures. For replant situations, weed control must take into account any previous herbicide applications. If herbicides were applied pre-emergence or pre-plant incorporated, their effectiveness may be reduced by the time corn is replanted, especially if the field is tilled before replanting.

Insects normally are a greater threat to late plantings than weeds. Later plantings may have more feeding from second-generation European corn borers, and silk feeding by corn rootworm beetles may also be more severe. Soil rootworm insecticide will need to be applied if the field was tilled since the initial planting application.

Earlier than normal autumn frosts can devastate late-planted corn. Yield is decreased if late-planted corn does not reach physiological maturity before plants are damaged by a freeze. Grain from corn plants killed by a freeze before maturity may be slow to dry down, and it tends to be brittle after artificial drying -- making it more likely to break during handling. Test weight also will be lower when corn is prematurely killed.If late-planted corn does mature ahead of frost, grain will be wetter and probably have to dry down in weather less favorable for drying. The following lists grain characteristics and appropriate management considerations for corn killed at various growth stages:

Corn Killed in Dough Stage
Kernels contain about 70% moisture. About one-half of mature kernel dry weight accumulated. Grain will unlikely achieve maximum yield potential unless stalk, ear and some lower leaves survive. Corn can be used for good quality silage, but entire plant must be allowed to dry to about 65% moisture.

Corn Killed in Dent Stage
In early dent, kernels contain about 55% moisture; are 3 to 3.5 weeks from maturity; and about half of mature dry weight has accumulated. In late dent, kernel moisture is decreasing and yield is within 10 percent of final mature dry weight when kernels are past half milkline. Corn will make good silage when harvested at a whole plant moisture content of 65%. Can be harvested for grain after long field-drying period. Grain yields will be reduced and test weights low. If plant is only partially killed or the crop is close to physiological maturity before the freeze (kernel milk line half-way or closer to tip), yield loss will be only 5 to 20 percent, and test weight will be lower.
Corn Killed When Physiologically Mature (Black Layer)

Kernel moisture is 28 to 35% depending on hybrid. Killing freeze will not affect grain yield or quality. Dry-down rate of grain depends on hybrid and environment.

For example, corn yield potential of a late planting declines at a faster rate than the yield potential loss of soybeans. After June 1, it may be advantageous to plant soybeans, instead of corn, if this fits your rotation. Sunflowers and buckwheat are other grain crops that can be planted very late. Forage sorghum, sorghum-sudan crosses or sudangrass can help boost forage supplies and be planted into July. You must consider prior herbicide and fertilizer applications, desired rotation, livestock feed requirements, and the possibility of erosion on slopes when you are choosing a crop to plant late. For more information on herbicide rotational restrictions, see UW Extension publication A3646 -- Field crops pest management in Wisconsin.
No comments:
Email ThisBlogThis!Share to TwitterShare to FacebookShare to Pinterest

Frost on Corn: The Key is Patience

This past weekend significant areas of northern Wisconsin were affected by frost with temperatures below 28 F. Most corn has either not emerged or is just starting to emerge. The key management practice here will be patience. It will take some time to determine if corn was damaged by this frost.

Symptoms of frost damage will start to show up about 1 to 2 days after a frost. Symptoms are water soaked leaves that eventually turn brown. After 3 to 4 days watch for new green leaves emerging n the whorl. If new leaves are not emerging check the growing point for discoloration. Any deviation from a white, cream or light yellow color indicates that the growing point is killed.

Although these treatments do not fully simulate the frost damage, they do provide some guidance on what a frost might do that completely defoliates the plant without killing it. Figure 1 describes the impact of complete defoliation on corn grain yield at the V2 stage of development. When all plants were clipped, grain yield decreased 17 bu/A from 210 to 193 bu/A (8%). When half of the plants were clipped in various patterns, grain yield was not affected; the trend was a decrease of 8 to 9 bu/A (4%).

These data indicate that frost early in development has relatively little impact on corn grain yield. If all of the leaves are removed from every plant in the field at the V2 stage of development and plants are not killed, then the expectation is that grain yield would decrease up to 8%. If the recent frosts were hard enough to kill plants then use the publication UWEX 3353 for guidance on whether or not to keep a stand and what to look for when assessing plant health.

To replant, or not to replant, that is the question. 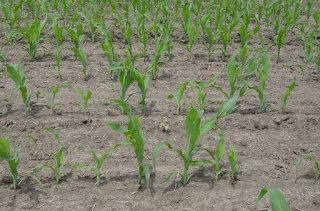 Farmers are faced with replanting decisions every year. Cold temperatures, wet or crusted soils, and/or pesticide or fertilizer injury may reduce seed germination and seedling emergence. After emergence, stands may be further reduced from insects, diseases, wind, frost, hail, and/or flooding. Stands too dense or non-uniform because of planter malfunctions or variable seeding depth may warrant replanting.

The major decision facing a farmer is whether it is more profitable to keep the original stand using a full-season hybrid or replant. Replanting may result in an optimum stand, but it would be planted at a later than desired date using a shorter season hybrid.

To minimize losses, information must be collected and evaluated quickly. You'll first need to estimate three factors: stand population, plant health, and evenness of spacing. Then compare the yield potential of the existing stand to the yield potential of a late-planted stand. When deciding whether to replant, you'll also need to consider replanting costs, seed availability, rotation restrictions from previous herbicide applications, and possible alternative crops. Base your replant decision on proven agronomic facts rather than emotion.

Steps in the process:

What is happening in the corn plant during the month of May? 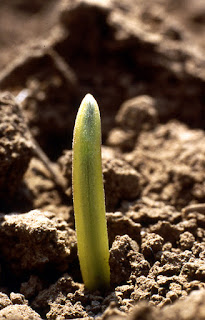 Good progress has been made planting corn in Wisconsin. Corn planted was at 56 percent complete, one day behind last year, but 10 days ahead of the five-year average.  Corn emerged was at 6 percent, the same as last year, and 4 days ahead of the five-year average. There was some concern that corn planted before April 20 might have experienced some imbibitional chilling due to cool weather towards the end of April. However, the crop has emerged well and there is currently more concern about black cutworm damage.

Corn seed is usually planted between 1.5 and 2 inches deep. For the first 24-72 hours after dry seed is planted into the ground, all that takes place is physical imbibition of water into the seed. Water and oxygen move slowly into the kernel through the pericarp. Membranes re-hydrate and hormones and enzymes are activated. Imbibitional chilling occurs when membrane re-hydration is disrupted by free radicals. Cold water is much more disruptive than warm water. Sugars and salts leak from the cells and kernel providing a food source for pathogens and other microbes.

After the seed swells, enzymes begin to breakdown starch in the endosperm. Sugars supply the embryo with energy for metabolism and cell division. The first structure to emerge is the root radicle. The plumule, which consists of the coleoptile and first leaves emerges from the seed and then from the soil. Elongation of the coleoptile ceases at the soil surface (VE) and elongation of mesocotyl ceases. The first leaves rupture the coleoptile tip. It takes about 7-10 days (125 Growing Degree Units - GDUs) for the VE stage to occur.

Shortly after the radicle emerges from the seed, seminal roots emerge and supply water and nutrients to the developing seedling. These roots are also important for nutrient uptake of pop-up and starter fertilizer. Seminal roots begin to die between V2 and V4. Nodal roots become the primary root system of the plant and arise from below-ground nodes near the growing point around V2.

Banding small amounts of starter fertilizer to the side and slightly below the seed can improve early vigor, especially when soils are cool. However, little evidence supports use of pop-up or starter fertilizer for increasing grain yield in many soils in Wisconsin.


Once the leaves emerge from the coleoptile, the seedling begins photosynthesis. The growing point is below the soil surface. All of the growth and development for above-ground plant parts is taking place on the growing point. This continues until V5-V6 (about the end of May). Frost at this time will not affect yield (<28 F). Hail will not affect yield. Severe yield losses can occur from flooding when plants are under water for more than 48 hours.