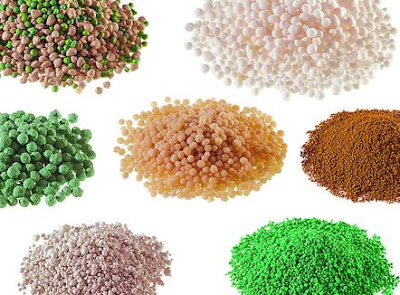 Banding fertilizer around the corn seed during planting is a common practice in the northern Corn Belt. Corn planting is frequently delayed in this region due to cold, wet soils, which result in slow root growth and limited uptake of nutrients during early developmental stages.

The last major evaluation of banded fertilizer in Wisconsin was conducted between 1995 and 1997 (Bundy and Andraski, 1999). Results indicated that full-season corn hybrids increased grain yield with banded fertilizer when planted late. Since then significant production changes have occurred including higher yields using transgenic crops, improved planting machinery and implements, and continued increases in soil nutrient levels. Growers question whether starter fertilizer is even necessary for modern corn hybrids and production practices, yet, often it is applied as “insurance.” Our objective was to evaluate the agronomic response of corn to banded fertilizer.

Plots were established at 11 locations (Arlington, Janesville, Montfort, Fond du Lac, Galesville, Hancock, Marshfield, Chippewa Falls, Seymour, Valders, and Coleman). Fertilizer treatments included: 1) an untreated check, 2) seed-placed fertilizer (10-34-0-1(Zn)) applied in the seed furrow at 4.1 gal/A, and 3) starter fertilizer (9-11-30-6(S)-1(Zn)) applied at 200 lb/A as a band 2 in. to the side of the row and 2 in. below the seed. Split-plots were eight to sixteen corn hybrids ranging in RM by 5-d increments from 80 d- to 115 d-RM. An emphasis was placed upon longer-season hybrids at each location and selection of hybrids differing in emergence vigor. Corn was harvested and yields determined mechanically from the center two rows of each four-row plot.


During 2017 and 2018 across all locations, significant differences were found for fertilizer treatment (Figure 1). Overall, starter fertilizer produced greater grain yield than seed-placed fertilizer and the untreated check. On average starter fertilizer (228 bu/A) increased grain yield up to 2.4% more than seed-placed fertilizer (224 bu/A) and the untreated check (223 bu/A). During 2017 and 2018, 5 of 11 locations had a significant response to fertilizer treatment. Consistent response across locations were seen at Arlington, Fond du Lac and Marshfield. One more year of research will be conducted during 2019.

The response of corn grain yield to starter fertilizer has been studied extensively in the United States, but the specific combinations of environmental conditions and agronomic factors that result in consistent responses remain unclear. An overall goal of this project is to predict when and where banded fertilizer will provide an economic return for the farmer. For each replicate soils were sampled and tested for nutrients. At the V5-V6 stage of growth, plants from each hybrid were sampled and tissue tests determined plant nutrient concentrations. 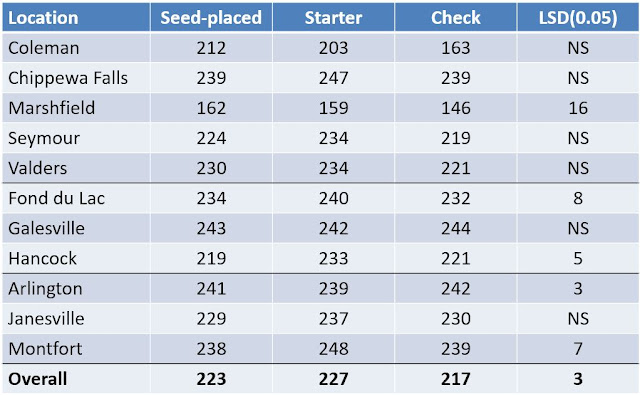 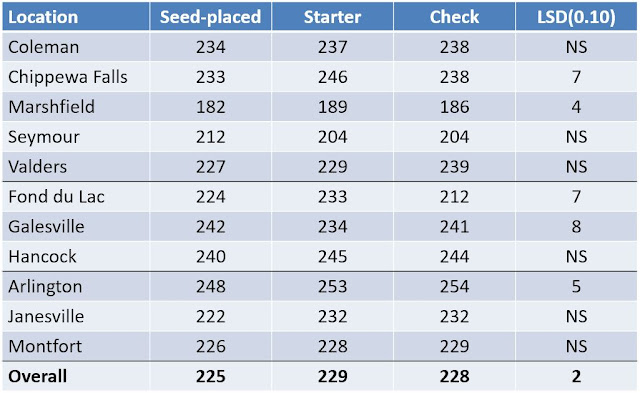 After a corn seed is planted, it is a wonder that the seed can survive and return 400 to 600 fold or more. If Wisconsin's cool, wet spring soils do not kill the plant through imbibitional chilling, then seed rotting pathogens or hungry insects can attack and kill the seed. Once the plant emerges, it is subject to even more biotic and abiotic stresses that can often kill the plant. Even management operations like wheel traffic and cultivator blight can inflict significant harm. It is a wonder ...

I often get the question, "How much seed survives to produce grain yield?" The question is motivated by the fact that seed costs have risen dramatically in the bio-tech era of corn hybrid development (1996 to present). Some of the rising cost of seed is due to growers planting fields to higher plant densities. Between 1982 and 2017, growers in IA, IL, IN, MN, and WI have increased plant population at the rate of 261 to 309 plants/A*yr (USDA-NASS, click here). In our experiments, the corn plant density that produces maximum yield has been increasing over time at the rate of 260 plants/A*yr.

Since both seed cost and field plant density are increasing, growers are increasingly concerned about how much seed actually survives to emerge and grow into a plant that produces grain yield. In a previous article I summarized the effects of planting date and environment on corn seed survival (click here). This article adds more data to the discussion and looks at recent trends in corn seed survival.

Prior to 2008, we planted corn hybrids in UW trials by over-seeding and hand-thinning back to a uniform plant density. In 2008, we purchased a precision plot planter and dropped a uniform 34,100 seeds/A at every test site during the 2008 to 2015 planting seasons. In the winter of 2015, we had the planter refurbished and upgraded with new software set to drop 34,850 seeds/A since then. At harvest, plant population was measured on ~10% of the plots. All data collected since 2008 (N= 12,036 plots) were used in the analysis.

Within the UW Corn Hybrid Evaluation program we have tested over 200 unique seed treatment combinations. However, there is no strong trend for seed survival improvement over time in the traditional trials, while there seems to be some improvement in the organic trials. 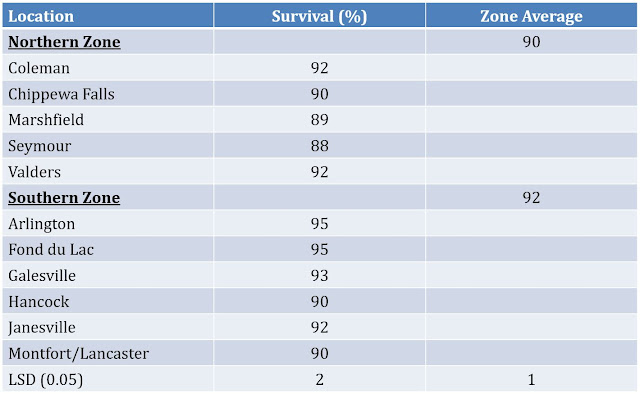 There are numerous factors that influence corn seed survival including hybrid, soil type, seed treatment, tillage system, cropping system, planting date, and environment. Traditionally, we have used a survival rate of 90%. More recent data indicates that 90 to 92% is a reasonable survival rate. However, seed survival at some locations and years can be as high as 95% and would need to be taken into account in order to achieve the target plant density.
No comments:
Email ThisBlogThis!Share to TwitterShare to FacebookShare to Pinterest

The Corn Yield Gap in Wisconsin

"Yield gaps" are the difference between potential crop yield and actual farmer yield. Potential yield is defined as the yield of a hybrid when grown in environments to which it is adapted; with nutrients and water not limiting; and with pests, diseases, weeds, lodging, and other stresses effectively controlled. Previous corn yield gap estimates from around the world have ranged from 11 to 84%. Lower yield gaps are typically seen under irrigated conditions. It is not clear if potential yield is determined by soil type or if eliminating water and nutrient stresses is more important. Political boundaries and technology availability also affect potential yield.

The NCGA Corn Yield Contest consists of three categories: rain-fed, irrigated and conservation tillage. Overall winners of the contest over time regardless of category were used to set the potential yield for corn. Although most winners in the NCGA contest are from southern Wisconsin where farmers use longer-season hybrids with greater yield potential, the overall record and 8 of 21 yields above 300 bu/A are from north central Wisconsin. USDA-NASS average corn yields were used for farmer yields.


Wisconsin corn production is a highly developed, sophisticated, high-yielding production system making it unlikely that variation exists in the availability of technology. Many farmers use the best technology available, however, some farmers choose not to employ the same level of technology as yield contest winners. At the farm level, yield gaps in many fields can be reduced by relatively simple changes in management practices. Yield maps are one way to identify yield gaps within a field and on your farm.
No comments:
Email ThisBlogThis!Share to TwitterShare to FacebookShare to Pinterest
Newer Posts Older Posts Home
Subscribe to: Posts (Atom)