Some Observations During the 2012 Drought 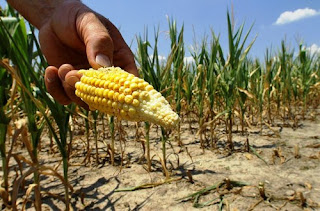 Although we have received significant rains in the last 10 days, much damage has occurred and many fields will not recover. County agents have estimated that about 20 to 30 percent of the fields in the southern tier of Wisconsin counties are barren. For stressed fields that have only partially pollinated, it becomes increasingly difficult to predict how plants react to increasing stress and the best management recommendations.

One observation that many farmers have noticed is lack of brace roots. Roots will not grow into dry soils. Since most of southern Wisconsin did not received any rainfall from June 1 until July 20, right during brace root formation, many plants have not developed brace roots. Some fields have lodged and most of those fields have recovered and are vertical. Brace root formation can still occur, but will slow as grain-filling proceeds.

Rock River Labs (Watertown, WI) reports that corn silage samples from IA IL, IN, MI, SD, and WI have been averaging 74.6% moisture (Table 2). Forage moisture is too wet for all ensiling structures. Nitrate-N levels have been low and averaged 706 ppm with only one sample above 4000 ppm. Remember to freeze your corn silage sample before sending to a forage lab for Nitrate-N testing.