The Best Corn Planting Dates Are Yet To Come

At the University of Wisconsin Agricultural Research Station in Arlington, we have established planting date trials since 1974. Multiple hybrids  are established as soon as field conditions allow. In many years, snow is still in roadside ditches when the first planting date occurs. I pooled data for full-season hybrids with Relative Maturity ratings of 104 to 108 RM for the last 10 years (2003-2012).

The corn grain yield response to planting date is shown in Figure 1. The planting date producing maximum grain yield during this period is April 28. Yields were within 95% of the maximum yield from April 15 to May 12, a 28-day period. By May 10 grain yield is decreasing 0.9 bu/A per day and then accelerates to 2.6 bu/A per day on June 1. Grain yield risk (the spread of the data points around the regression line) is lowest in April and early May at + 14 bu/A and increases to + 45 bu/A in late May and early June. 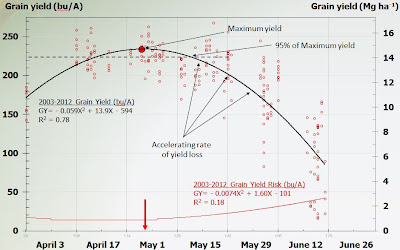 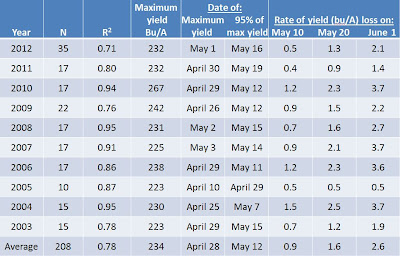 Like last year the important thing to remember is patience. Be ready to go so that when field conditions are fit, you are ready to plant. Our standard planting date recommendation is to plant as quickly and safely as possible after April 20 in southern Wisconsin, and after April 30 in northern Wisconsin.

http://corn.agronomy.wisc.edu/Research/Default.aspx
Email ThisBlogThis!Share to TwitterShare to FacebookShare to Pinterest