During years with strong grain prices numerous products appear that seem too good to be true. If there was any growing season when a corn root growth enhancer should work it was during the  drought of 2012. Ascend® is touted as a "... tool to increase plant efficiency" and "... can stimulate higher yields through a larger root mass ..."

We tested the plant growth regulator Ascend® by applying it to an adapted hybrid and comparing it to the same hybrid left untreated at eleven locations in Wisconsin. Applications were made at the labelled rate and timing of 3.2 oz/A at V3-V4. Locations that exhibited significant drought stress included Chippewa Falls, Lancaster, Janesville, Arlington and Fond du Lac. Hancock was an irrigated site. 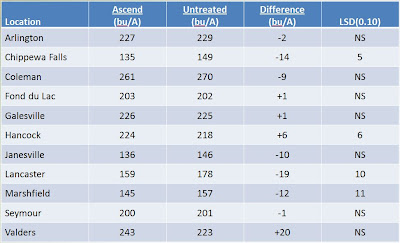 At none of the sites that had significant drought stress during the growing season did Ascend® stimulate higher yields. Across all locations there was no statistical difference between corn treated with Ascend® (196 bu/A) and untreated corn (200 bu/A).

For details of the experiments see http://corn.agronomy.wisc.edu/Research/11Miscellaneous/Ascend2012.pdf
Email ThisBlogThis!Share to TwitterShare to FacebookShare to Pinterest