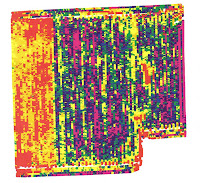 To maximize field productivity and profitability, growers are increasingly using site-specific management rather than whole field management practices. Our objective is to describe spatial and temporal yield variability to predict grain yield of specific land cells (parcels of land). The goal is to determine if yield maps allow accurate delineation of management zones for prescription applications.

Each land cell was ranked within its rotation x tillage combination; therefore, to incorporate the CS rotation effect, two years are required for one cycle. Our analysis found that land cells are significantly different for grain yield and could be ranked within a tillage x rotation treatment. CC-NT required 2 years (one cycle) before a significant yield difference was first found between land cells, while corn in CS-NT required 20 years (10 cycles). High- and low-yielding land cells were not consistently identified until 16-20 years (8-10 cycles) had passed, with the exception of CC-CT which only required 4 years (2 cycles).

For specific land cells, high corn yield did not always predict high soybean yield and vice-versa. For example, land cell 102 was the lowest yielding cell for corn, while yielding statistically the same as the highest land cell for soybean.