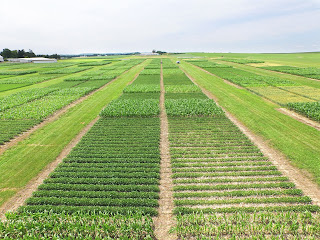 Crop response to different tillage systems and crop rotations is highly influenced by soil conditions that include soil drainage class; soil texture; soil organic matter; water holding capacity; and weather variables, such as temperature, precipitation amount and distribution, and frost-free days. In a study conducted by Iowa State University, corn yield and economic return with different tillage systems and crop rotations were highly influenced by regional soil and climate conditions. The study was conducted at seven locations in Iowa from 2003 to 2013. The experiment involved five tillage systems (no-tillage, NT; strip-tillage, ST; chisel plow, CP; deep rip, DR; and moldboard plow, MP).Three crop rotations of corn–soybean, C–S; corn–corn–soybean, C–C–S; and corn–corn, C–C were evaluated. The objectives were to: (i) investigate seasonal variability in corn yield as affected by tillage and crop rotation, (ii) identify appropriate tillage for each crop rotation and location, and (iii) evaluate the magnitude of crop rotation effect on corn yield.

Corn yields varied from 40 to 252 bu/A with no detectable increase over time. The input cost for corn production was greater with conventional tillage systems over NT and ST by 7.5 and 5.7%, respectively. Yield and economic returns for the three rotations were as follow: C–S > C–C–S > C–C. Yield and economic penalty were greater with NT than conventional tillage in the northern locations (poorly-drained soils) than locations with well-drained soils. The corn yield penalty associated with C–C was location specific and varied from 11 to 28%. The findings suggest a location specific adoption of tillage and crop rotation for achieving optimum yield.

Implications
The corn yield response to different tillage systems within each crop rotation was similar with a
few exceptions. The adoption of NT or ST practices in combination with a C–S rotation has lower risk for yield and economic return losses as compared to C-C-S or C-C rotation.The results of this study suggest that at locations with well-drained soils, NT and ST can be competitive in terms of yield and economic return as compared to conventional tillage systems.