What is happening in the corn plant during the month of June? 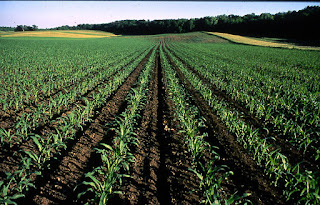 Corn planting was nearly complete by the end of last week. As we head into the month of June, the corn plant changes from a juvenile to more of an adult. The seminal roots that originated in the seed are dying and the nodal roots are becoming the dominant root system which will eventually occupy a cylindrical volume roughly 5-6 feet in diameter and 5-7 feet deep depending upon soil characteristics.

By V6 (about 24-30 days after emergence - 475 GDU) all plant structures have developed on the growing point. All plant parts are present. The growing point and tassel, differentiated in V5, are above the soil surface. The stalk is beginning a period of rapid elongation getting taller. The determination of kernel rows per ear begins and is complete by about V10-V12. This yield component is strongly influenced by hybrid genetics. Tillers (suckers) begin to emerge at this time. Lower leaves degenerate and are torn from the stalk as it expands. During early June there is a new leaf emerging (V-stage) about every 3 days. 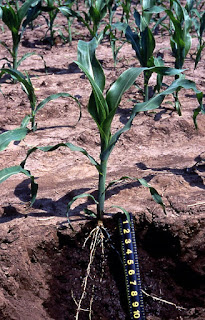 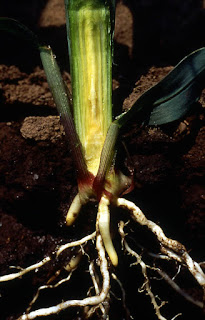 June is the time to apply nitrogen (up to V8) before rapid uptake period in corn. Precise fertilizer placement is less critical. Lodging can often occur during this time since brace roots have not appeared. Rootworm eggs will soon hatch and larvae begin feeding on root systems. Defoliation from hail ,wind, and leaf feeding corn borers may decrease row number on the ear. If a frost would occur during June there would be 100% yield loss caused from plant death and killing of the growing point. Hail can cause up to 53% yield loss when completely defoliated. Short-term flooding can cause severe yield loss if the growing point is below the water surface.

By V12 ( 42-46 days after emergence - 815 GDU) potential kernel rows are determined. The number of kernel rows is set. The number of ovules (potential kernels) on each ear and size of ear is being determined and is strongly affected by environmental stresses. During late-June there is a new leaf emerging every 2 days and brace root formation begins stabilizing the upper part of the plant. The plant is utilizing 0.25 inches of water per day. Nutrient deficiencies, will reduce the potential number of kernels and ear size. Large amounts of nitrogen, phosphorous, and potassium are being utilized at this stage. Early hybrids- progress faster through growth stages and usually have fewer leaves and smaller ears than late hybrids.

For most of Wisconsin hybrids (~100 day), each plant typically develops 20-21 leaves. The rate of plant development for any hybrid is directly related to temperature, so the length of time between the different stages will vary as the temperature varies.  Environmental stress may lengthen or shorten the time between vegetative and reproductive stages. The length of time required for the yield components of ear density, kernel number, kernel weight varies between hybrids and environmental conditions.

Ears per unit area, kernel number per ear and kernel weight all contribute to yield. These yield components of corn are determined early in the life cycle of the corn plant with some established by the end of June.
Email ThisBlogThis!Share to TwitterShare to FacebookShare to Pinterest