Now is the Time to Begin Evaluating Corn Fields for Harvest 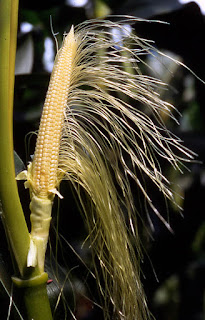 For most corn fields in Wisconsin, pollination and the "lag" phase of kernel development is wrapping up and we are in a "linear" phase of development where kernels are accumulating 4-6 bu/A per day. The grain filling period of corn lasts approximately 60 days (Figure 1). The "lag" phase starts with the kernel ovule fertilized by pollen and for the next 7-10 d cell division occurs in the endosperm. The "linear" phase is most important for yield and lasts about 40 days. For a 200 bu/A yield level, starch accumulates in the kernel endosperm at the rate of 5 bu/A per day during this phase. The grain filling period ends with a 7-10 d "maturation" phase when the kernel moves from 50% kernel milk to the black layer stage. During grain filling most management options are no longer available unless irrigation is available when water and N can be applied during the first half of grain filling.


Early August is the time to get a sense of what to expect and plan for in the coming harvest. Lots of things can still happen and we still have a long way to go before harvest, but now is the time to schedule custom harvest operations, plan the harvest queue, and make sure that adequate drying and storage capabilities are available. Also, marketing adjustments might need to be considered.

First determine the success of pollination.  There are two techniques commonly used to assess the success or failure of pollination. One involves simply waiting until the developing ovules (kernels) appear as watery blisters (the "blister" stage of kernel development). This usually occurs about 10 days after fertilization of the ovules.

Another more earlier means can be used to determine pollination success. Each potential kernel on the ear has a silk attached to it. Once a pollen grain "lands" on an individual silk, it quickly germinates and produces a pollen tube that grows the length of the silk to fertilize the ovule in 12 to 28 hours. Within 1 to 3 days after a silk is pollinated and fertilization of the ovule is successful, the silk will detach from the developing kernel. Unfertilized ovules will still have attached silks. Silks turn brown and dry up after the fertilization process occurs. By carefully unwrapping the husk leaves from an ear and then gently shaking the ear, the silks from the fertilized ovules will readily drop off. Keep in mind that silks can remain receptive to pollen up to 10 days after emergence. The proportion of silks dropping off the ear indicates the proportion of fertilized ovules (future kernels) on an ear. Sampling several ears at random throughout a field will provide an indication of the progress of pollination.

Other methods for calculating corn grain yield can be found at http://corn.agronomy.wisc.edu/AA/A033.aspx.
Email ThisBlogThis!Share to TwitterShare to FacebookShare to Pinterest