Who can forget the “Drought of 1988” or the “Father’s Day Frost of 1992” or the “Flood of 2008.” The 2019 corn planting season in Wisconsin will have a similar notoriety and be remembered for a long time. Corn planting progress records have been kept by USDA since the 1979 growing season. The 2019 planting season was “unprecedented.”

Farmers in Wisconsin typically plant about 50% of the corn acreage by May 7 (Figure 1). The earliest we have hit the 50% planted acreage level was during 2010 by Week 16. Other early years were 2016, 2006, 2005, 2000, and 1999. The slowest we have hit the 50% mark was 1996 and 2014 at Week 20. That is until 2019 when we hit the 50% mark at Week 21 and what subsequently happened during June. Significant corn acres were planted in July this year. Planting date sets up your season. If you are delayed or planting is extended then workload is delayed or extended as well. Some corn will not make grain or be too expensive to dry. Some corn will not make good corn silage due to lack of grain development prior to a killing frost.

Corn as a Cover Crop

Who would have thought that corn could be grown as a cover crop? Yet, due to low forage inventories and the relaxing of USDA-RMA rules, corn was allowed as a cover crop to be harvested as an emergency forage. To be sure,  corn is deep-rooted and by the end of the growing season can produce significant residue even when planted in July. A number of management guidelines needed to be considered to qualify including: increased plant population, narrower row spacing, crop rotation, planting into residue, lower nitrogen rate, and good weed control.

Will the Corn Crop Make It?

Corn maturity is all over the board due to late planting, and within field variability is equally as great. An early frost could spell doom for a lot of cornfields. Most late-planted corn will likely be immature and killed by frost. Patience will be required to allow the corn to dry to the proper moisture for storage and preservation. Starch content will be most affected with late-planted corn. However, this can be easily remedied by adding more grain corn into the ration.

Filling bunker and pile silos may also be a challenge where all the corn won’t be ready at the same time. Decisions will need to be made as to whether to start a new pile or risk reopening up an existing pile. Some may choose to just fill a bag with any late-cut corn.

None of this will make life easy for custom chopping operations either. Harvest season will be extended this year, and any information that can be passed along to custom operators will help with planning and proper timing of silage harvest.

In-season Guidelines for Predicting Corn Silage Harvest Date
Once corn silks it takes about 55 to 60 days to achieve maturity (R6). Development during grain filling is influenced by temperature, but not as much as during the vegetative leaf emergence stages. Instead the number of days between pollination and a killing frost influence the time to maturity. So, if an average killing frost occurs October 1, then subtracting 55 to 60 days means that the crop must be silking by August 2-7. Silage harvest usually begins around 50% kernel milk which is 42 to 47 days after silking, so silking must occur by August 15-20. However, remember that at some point yield does not matter anymore and that timing of silage harvest is dependent upon achieving the proper moisture for the storage structure.

At the dent stage (R5), corn has accumulated 75-85% of silage yield and 60-75% of grain yield and needs about 27-32 days to avoid significant yield reductions due to frost (Table 1). In order to avoid yield reductions caused by frost, corn intended for silage should be silking by late August, while corn intended for dry grain should reach the dent stage by September 1.

Table 1. The relationship between kernel growth stage and yield of corn for normal planting dates. 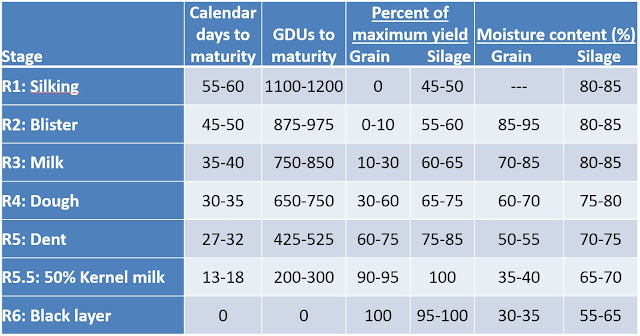