Corn Transgenic and Trait Technologies in UW Trials during 2012

The weather during 2012 is proving to be similar to other drought years like 1976, 1988, 1989 and 2005. Yields decreased during these years, except for the 2005 season when record grain yields were recorded. A big difference between 2005 and previous drought years was the presence of transgenic traits in corn hybrids, especially Bt-ECB traits, and eventual rainfall that started in the first few weeks of July.

European corn borer and increased stalk tunneling damage is often associated with drought stressed environments. Water transpiration cools important plant parts when it is able to get to those structures. If ECB tunnels are present, water flow to leaves and the ear is interrupted and surface temperature can increase along with stress. Modern hybrids have a greater capacity to maintain the integrity of the stalk for efficient water use. I often hear comments from farmers that "these hybrids can withstand greater stress." However, when the water in the soil profile runs out, it runs out regardless of whether or not it is transgenic.

The objective of the University of Wisconsin Corn Hybrid Performance Trials is to provide unbiased performance comparisons of hybrid seed corn available in Wisconsin. In 2012, a total of 510 corn hybrids are being evaluated in 53 experiments at 14 locations (Figure 1). 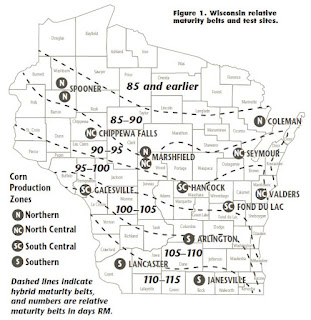 Below is a list of technologies included in the program with the corresponding number of hybrids being evaluated in various zones and trials (Table 1). These include both transgenic and trait technologies. In the table below, an “_S” indicates a silage trial for the region, while an “_ORG” indicates and organic trial. Leafy and bmr traits are not listed.