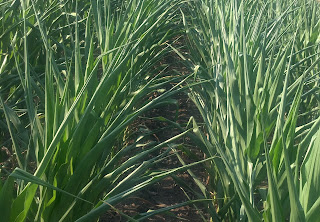 The story of the 2012 growing season is like "a tale of two extremes" for corn production. The season got off to a great start with warmer than normal temperatures during March. Corn growing in the northern half of Wisconsin (roughly on a line from Black River Falls to Oshkosh) has been developing normally with numerous rain events that have even caused significant soil erosion. The governor has declared three counties disaster areas due to flooding.  The southern half of Wisconsin has been in a severe June drought with little to no rain forecasted. For a summary of the growing season (April 1 to July 4) at the UW-ARS farms at Arlington and Marshfield, see http://corn.agronomy.wisc.edu/Season/.


The growing season started above normal for growing degree days and then paralleled the 30-year normal accumulation pattern through April and May. Over the last couple of weeks during June, growing degree accumulation has increased compared to the normal.

Precipitation in northern Wisconsin is comparable to the 30-yr normal. But, in southern Wisconsin accumulated precipitation is below normal and approaching some of driest years recorded (1976, 1988, 1989, and 2005). The southern four tiers of Wisconsin counties are most affected. Other parts of the Midwest Corn Belt have seen rain showers move in east-west bands, so drought stressed fields are more random. Fields with no water stress are often located near fields showing significant water stress.


Managing corn during and after a drought http://corn.agronomy.wisc.edu/Management/L046.aspx.
Email ThisBlogThis!Share to TwitterShare to FacebookShare to Pinterest