What is happening in the corn plant during the month of September? 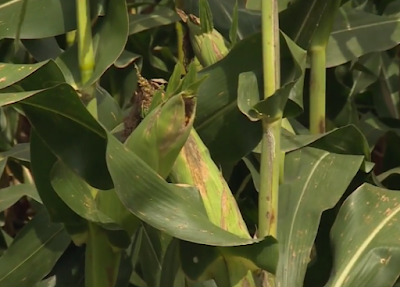 In mid-August, USDA-NASS made their initial corn yield projections for the 2016 season. However, September is really the month when we project how our farming skills and previous decisions come together to produce a corn crop. By this time, yield becomes secondary because the season and growth of the crop is largely over. A lot can still happen, but the focus of many decisions are based upon plant and grain moisture.

During September, the crop has usually dented and the kernel milkline is progressing towards the kernel tip. Physiological maturity is reached when all kernels on the ear have attained their dry matter maximum accumulation. Eventually a black abscission layer forms indicating that moisture and nutrient transport from the plant has ceased. Once physiological maturity (R6-Black layer) is achieved it is a physical process to dry the grain down to a harvest moisture between 20 and 25%.

Husk leaves turn color and ears begin to droop. Most modern hybrids have the stay-green trait which allows for better stalk quality and standability in the field. High yielding years  often put stress on the plant due to "stalk cannibalization" where nutrients are translocated to developing kernels at the expense of stalk health.


If ensiling can be used to store grain, then corn silage or high moisture grain can be harvested. Silage harvest would be slightly earlier than R6 as milkline moves down towards kernel tip (Figure 1). High moisture corn is usually harvested shortly after R6. Frost has no effect on yield at this point. However, lodging from disease, insect damage or can result in physical loss of yield.
September is the month when corn silage is harvested in Wisconsin. Silage choppers put a lot of material through a relatively small opening cutting (or shredding) plants to 3/4 inch TLC along with kernel processing to break kernels. Usually the window to harvest corn silage is about 7 to 14 days depending upon the maturities of the hybrids selected at planting. Owning your own chopper provides more flexibility for timing harvest. If dealing with custom silage choppers it is imperative to communicate accurately the whole plant moisture of your fields and the rate of drydown. Adjustments to silage moisture can still occur by raising or lowering the cutter bar because the driest part of the plant is the grain.

During September, dry grain is usually not ready for safe storage; it needs to be at 13-15% moisture for long-term storage. It may be advantageous to let crop partially dry in the field.
Email ThisBlogThis!Share to TwitterShare to FacebookShare to Pinterest