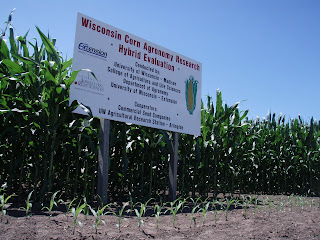 In 2011, the UW Corn Hybrid Evaluation program conducted an organic hybrid/variety trial for corn at 7 locations in Wisconsin. The objective is to provide producers information on performance and characteristics of corn in a certified organic production system. Where possible the trials were conducted using approved organic production practices. At other sites where land was not certified organic, the trials were placed alongside conventional trials. Seed used for the trials was either produced organically or was untreated.

Organic production is defined as “a production system that is managed, in accordance with the Organic Food Production Act and Regulations (October 2002), to respond to site-specific conditions by integrating cultural, biological and mechanical practices that foster cycling of resources, promote ecological balance and conserve biodiversity.” The organic system is “a plan of management of an organic production operation that has been agreed to by the producer and the certifying agent and includes written plans concerning all aspects of agricultural production  or handling described in the act and the regulations.